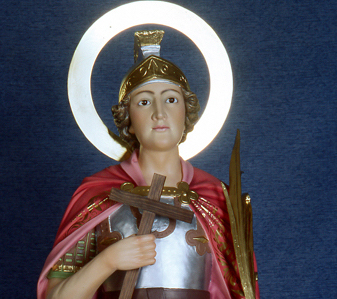 If you’ve never heard of St. Expedite, you might think the name is a joke. But he’s quite real, and still popular in certain parts of the world — and among procrastinators everywhere.

A recent article at Patheos.com reminded us about St. Expedite, whose actual name has been lost to history:

Saint Expedite is a very early Christian martyr — a Roman soldier of Armenian descent executed in 303 during Diocletian’s persecutions. He appears in this context in the Martyrology of Jerome (Martyrologium Hieronymianum), the oldest surviving list and calendar of Christian martyrs.

‘Expedite’ was not initially a name but instead refers to the saint’s occupation as a type of foot soldier who carried little or no baggage and so was able to travel expeditiously. Saint Expedite’s votive imagery depicts him as a handsome, young Roman soldier holding the palm branch indicating martyrdom in his left hand. In his right, he holds aloft a cross with the Latin word ‘Hodie’ on its crossbeam. With his foot, he stamps on a crow, which holds in its beak a ribbon emblazoned with the word ‘cras.’ The image sometimes horrifies crow lovers, but it’s not an inducement to harm birds. Rather, it’s a Latin pun – simultaneously mimicking the sound of a crow, cras means ‘tomorrow’, while hodie means ‘today.’ Expedite stamps out tomorrow in favor of today.

In other versions of the story, the crow was Satan in disguise, trying to get the young Roman to postpone his plan to seek baptism.

“During the Middle Ages, he was venerated in the area of Turin, Italy,” according to Catholicism.org. “Then, during the seventeenth and eighteenth century, his cult began to blossom in Germany and Sicily, and his popularity grew elsewhere too.”

Then during Vatican II in the 1960s, Expedite was one of many saints from the early Church to lose his feast day (April 19) and be “demoted,” as it’s often erroneously described. In fact it was “was not so much a demotion as a reassignment,” according to an article at OCCatholic.com. “The confusion arose when Pope Paul VI revised the Liturgical Calendar, which includes the feast days of saints that are commemorated at Mass. … The problem: the calendar was simply too crowded with saints, particularly saints who had local or regional rather than universal followings.”

This lowered Expedite’s profile, but he’s still remembered fondly by many. In 2018, the book Soon: An Overdue History of Procrastination, from Leonardo and Darwin to You and Me reported on the status of “the patron saint of procrastinators.” FastCompany.com published an excerpt:

The Saint Who Refused to Delay is the object of a devotional cult that spans several continents. On tiny Réunion Island in the Indian Ocean, believers build roadside altars in Expedite’s honor, always painted bright red and decorated with small statues of the saint, where they’re part of an elaborate protocol of intercessory prayer and bargaining. In São Paulo, Brazil, worshippers crowd services on St. Expedite’s feast day to leave scribbled prayers at church altars imploring the saint’s help.

But the locus of devotion to St. Expedite in the United States is in Louisiana, where his cult draws on a syncretic mingling of Catholic and voodoo influences. Nowhere does it thrive more fully than in New Orleans … Today, one of the best-known statues of St. Expedite sits in a small church on the scruffy edge of New Orleans’s French Quarter, where the scent of spilled beer hangs heavy on the streets. Our Lady of Guadalupe Church is the city’s oldest, built in 1826 as a funeral chapel. Its statue of St. Expedite occupies a small niche in the back of the church (photo).

… I have never prayed to St. Expedite, but I share his devotees’ optimism, their faith that good things will come. Procrastinators may be depressed, delusional, self-destructive, but we are also optimists; we believe that there will always be a better time than the present to do what needs to be done. Optimism is the quality most often overlooked in procrastinators. For us, tomorrow is always brimming with promise.

The St. Expedite statue pictured on this page is available through Mazzolini Artcraft, in various heights between 12 and 60 inches. Contact John at [email protected] or 888-437-4499 for details. Then review some tips for appealing for Expedite’s aid. Apparently he likes cake.