The myths and legends surrounding St. Patrick are part of his worldwide appeal 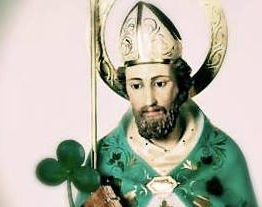 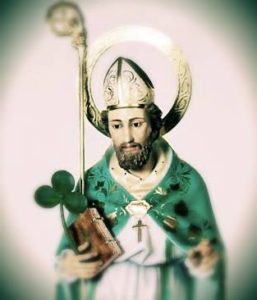 Perhaps it’s fitting that the patron saint of a people known for storytelling is best recognized by the myths and legends surrounding him. Patrick — or Padraig, pronounced Paw-rik, in Irish — is one of the most recognized saints but also one of the most misunderstood. Contrary to popular belief, he was not Irish by birth, probably did not wear green, and definitely did not drive all the snakes from Ireland (the last ice age did that).

He’s also the subject of legends, the most fascinating of which is not well known outside Ireland: his meeting with Oisín, a figure from Celtic mythology. Oisín was the son of Fionn mac Cumhaill, a great warrior and leader. His followers were known as Fenians, a name adopted by Irish nationalists.

According to the story, Oisín fell in love with the goddess Niamh, and went to live with her forever in Tir na nOg, a land of eternal youth. But he got homesick, so Niamh granted him a visit to Ireland on a magical horse, on the condition that he never dismount. While trying to help someone, Oisín falls off the horse, and begins dying immediately — he’s been gone for hundreds of years. The people who find him are baffled, so they take him to the wisest man they know.

Author Juliene Osborne-McKnight picks up the story from there in I Am Of Irelaunde: A Novel of Patrick and Osian. Though written from Patrick’s perspective, the book depicts the richness and depth of Irish culture at that time, and Patrick’s slow recognition that it might be better to embrace and build on those traditions rather than try to eradicate them (reflected in the story that he used a shamrock to explain the Holy Trinity). Here’s an excerpt:

“He was the leader of the Fenian warriors of ancient Eire. And he could not have been your father. Use your reason, old man! Fionn Mac Cumhail has been dead for two hundred years.” 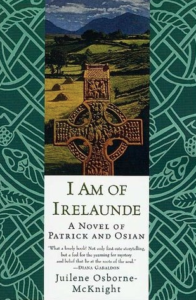 “He was the leader of the Fianna, yes, but not at the start. His beginnings were none so glorious. He was born in the dead of winter, Padraig, born in the snow, with his mother hard on the run from the clans of Goll Mac Morna. Shall I tell you the tale?”

I closed my eyes, pressed my fingertips against the closed lids. Red and purple lights exploded behind the lids. I felt a huge sigh well up from me. Osian laughed.

“May that be the only thing I do like a Fenian. Tell your tale. It seems I am compelled to listen. But do not make it overlong.”

“Over long.” Osian paused and looked again in wonder at his gnarled, ancient hands. He smiled crookedly and I felt my heart wrench in pity. I shook my head to chase such weakness away. One should never pity these barbarians; they take advantage of such weakness. Osian began.

“My grandmother’s name was Muirne, Padraig. She was young and beautiful with hair like the copper leaves of autumn. She was the daughter of a druidess, the wife of the great chief Cumhail Mac Trenmor. But none of that helped her in the winter of the clan wars …”